Problem hidden
|This problem was hidden by Editorial Board member probably because it has incorrect language|version or invalid test data, or description of the problem is not clear.|
Fatih Gelgi, 2008
Points: 70 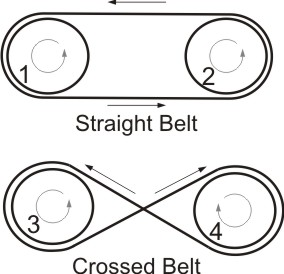 The diagram above depicts the two ways a belt can be installed between two gears. In this illustration, pulley 1's belt directly drives pulley 2 (a 'straight' connection) and thus they will rotate in the same direction. Pulley 3 drives pulley 4 via a 'crossed belt' that reverses the direction of the rotation.

Given a list of the belt types that connect the pulleys along with the fact that pulley 1 is driven in a clockwise direction by the engine, determine the drive direction of pulley N. Each belt is described by three integers: * S_i -- the driving (source) pulley * D_i -- the driven (destination) pulley * C_i -- the connection type (0=straight, 1=crossed)

By way of example, consider the illustration below. N = 4, and pulley 1 is driven clockwise by the thresher engine. Straight belts drive pulley 2 and then pulley 3, so they rotate clockwise. The crosswise belt reverses the rotation direction so pulley 4 (pulley N) rotates counterclockwise.

As in the example illustration.