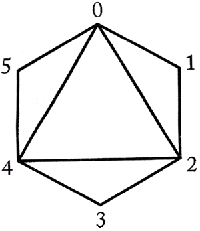 The elementary triangle (1,3,5) intersects all the triangles in this triangulation.

The number of test cases t is in the first line of input, then t test cases follow separated by an empty line

For each test case your program should produce one line with exactly one integer - the maximal number of triangles in the triangulation, that can be intersected by a single elementary triangle of the input polygon.