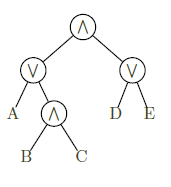 An AND/OR tree is a tree-like graphical-representation of boolean ex- pressions written as either conjunctive- or disjunctive-normal form. Since the sub-expressions of a normalized form alternate in being either disjunctive or conjunctive forms, you’d expect the sub-trees on an AND/OR tree to alternate in being AND- or OR- trees depending on the sub-tree’s depth-level. The example upwards illustrates this observation for the boolean expression (A (B C)) (D E) where the trees in the 1st (top-most) and 3rd levels are AND-trees.
Write a program that evaluates a given and/or tree.

Your program will be tested on one or more test cases. Each test case is specified on exactly one line (which is no longer than 32,000 characters) of the form:
( E1 E2 . . . En )
where n > 0 and Ei is either T for true, F for false, or a sub-expression using the same format.
The trees at the deepest level are AND-trees. The last test case is followed by a dummy line made of ().

For each test case, print the following line:
k. E
Where k is the test case number (starting at one,) and E is either true or false depending on the value of the expression in that test case.