ANARC07G - Let go to the movies

A favorite pastime for big families in Acmestan is going to the movies. It is quite common to see a number of these multi-generation families going together to watch a movie. Movie theaters in Acmestan have two types of tickets: A single ticket is for exactly one person while a family ticket allows a parent and their children to enter the theater.  Needless to say, a family ticket is always priced higher than a single ticket, sometimes as high as ﬁve times the price of a single ticket. 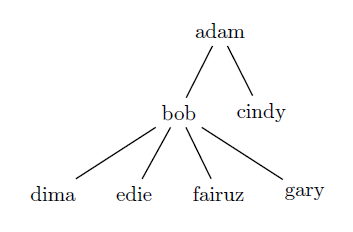 Your program will be tested on one or more test cases. The ﬁrst line of each test case includes two positive integers (S and F)where S is the price of a single ticket and F is the price of a family ticket. The remaining lines of the test case are either the name of a person going by him/herself, or of the form:

where N1 is the name of a parent, with N2 ... Nk being his/her children. Names are all lower-case letters, and no longer than 1000 characters. No parent will be taking more than 1000 of their children to the movies :-). Names are unique, the name of a particular person will appear at most twice: Once as a parent, and once as a child. There will be at least one person and at most 100,000 people in any test case.

For each test case, write the result using the following format: