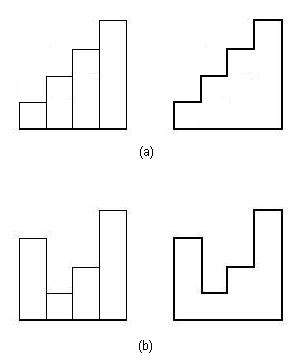 Input consists of multiple test cases. Each test case describes a histogram and starts with an integer N, 2 ≤ N ≤ 15, denoting the number of rectangles it is composed of. Next line consists of N space separated positive integers representing the heights of the rectangles. All heights are distinct and less than or equal to 100. N=0 indicates the end of tests. There are atmost 50 test cases.

For each test case output the maximum possible perimeter of the histogram and the number of permutations that give maximum perimeter in a single line, separated by a single space.