You are working as a software engineer of Moogle! Now the boss of Moogle wants you to create a program which will efficiently handle some operations. At first, we should tell you about the structure of the employees at Moogle! Each employee has an integer id from 1 to N. Where 1 is the id of the Managing Director of Moogle! , who is the greatest boss of all the employees. Then except the Managing Director, each employee has an immediate boss. No employees have more than one immediate boss. Now your boss wants to have some operation like this –

Let’s see the structure, hope you will get a clear idea about the problem. 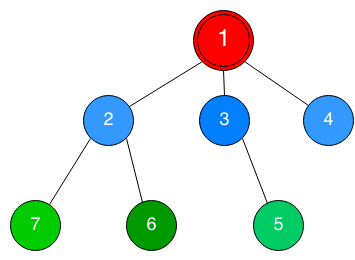 Now if your boss wants to do the first operation for Employee ID 2. Then the output will be

If your boss wants to do the second operation for the Employee ID 1, then the salary table becomes -

Input starts with an integer T (≤ 3), denoting the number of test cases.

Then there will be N lines. The ith (1 ≤ i ≤ N) line contains two integers pi and si (0 ≤ pi ≤  N, 1 ≤ si < 500). pi denotes the parent and si denotes the salary of the ith employee, respectively. You can assume that the employee id with 1 is the managing director and only its parent is 0.

You can assume that the input builds a valid rooted tree.

For each case, print the case number in a line. Then for each query type 1, print the sum of the salary.