Mirek has a favourite way from home to the university that he traverses every working day. The route consists of sections and each section is a straight segment 10 meters long. Each section is either a straight ahead extension of the previous section or it is perpendicular to the previous section. After traversing each section Mirek takes a small break to admire the beauty of the nature. During his walk he never visits the same place twice. 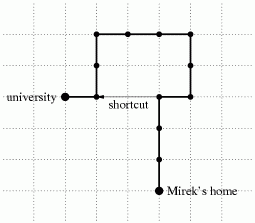 Yesterday Mirek stayed up long in the night at the party and today he got up late from bed. He knows that he will miss the first lecture unless he changes his usual route. He plans to make one shortcut but he wants the shortcut to be as short as possible (well, we can tell you in secret that he doesn't want to be on time, he just wants to calm his conscience). The shortcut must be either a horizontal or vertical segment connecting two break points of Mirek's route.

Write a program that:

The input begins with the integer t, the number of test cases. Then t test cases follow.

For each test case, the first line of the input contains one integer n (3 <= n <= 250 000) being the number of sections of the route. The second line of the input contains a sequence of n characters N, E, S or W with no spaces in between. Each character is a description of one section of the route. Character N, E, S or W means that Mirek walks 10 meters north, east, south or west respectively. You may assume that at least one shortcut exists for the given route.