Solitaire is a game played on an 8x8 chessboard. The rows and columns of the chessboard are numbered from 1 to 8, from the top to the bottom and from left to right respectively.

There are four identical pieces on the board. In one move it is allowed to: 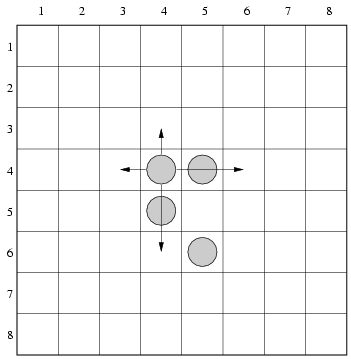 There are 4 moves allowed for each piece in the configuration shown above. As an example let's consider a piece placed in the row 4, column 4. It can be moved one row up, two rows down, one column left or two columns right.

Write a program that:

The input begins with the integer t, the number of test cases. Then t test cases follow.

For each test case, each of two input lines contains 8 integers a1, a2, ..., a8 separated by single spaces and describes one configuration of pieces on the chessboard. Integers a2j-1 and a2j (1 <= j <= 4) describe the position of one piece - the row number and the column number respectively.