Farmer Cream is a businessman that wants to live in the suburbs. He recently bought a little farm in Creamville and wants to earn money from it. After the sell, Farmer Cream has D money a remaining to spend. He's in negotiations with an important firm of farming but he thinks they're not being honest (they're trying to steal some money). He knows the number of fences F in the farm but he doesn't know the number of plots P to farm. The firm is offering a budget B per plot, so he needs to multiply the budget per the number of plots to know the total amount of money to spend. He needs to know if he accepts the contract, for that, he
needs to have at least M money to live after the buy. Otherwise, the firm is trying to bankrupt Farmer Cream and take over the farm.

In order to do this. Farmer Cream needs your help. Assuming the fences are lines y = ax + b he only knows three things about them. 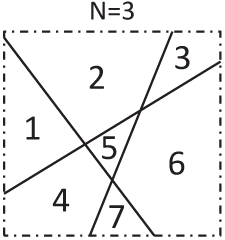 In the example, there are 3 fences and 7 plots.

The input contains several test cases, each one corresponding to a different situation. Each test case consists of a single line with four integers D F B M (1 <= F,B,M <= 10^6) and (1 <= D <= 10^18) separated by a single space. D represents the remaining money of Farmer Cream, F represents the number of fences, B represents the budget in Bsf per plot and M represents the minimum amount of money that Farmer Cream needs to live.