Combinational logic circuits are part of all modern CPUs and other electronic means of information processing. These processors are widely used and constantly grow in complexity. Number of transistors in a modern CPU has exceeded 2 billion?. And it looks like this growth does not tend to stop. At the same time, technological processes of processor production shrink. Transistors become smaller and more vulnerable to external influences. And now, even far from the strongest external radiation or magnetic field can lead to short-term changes in the logical values of microelectronic circuits. This problem is especially acute in space systems and other systems critical to reliability. In this problem, we pose the question, how to make the circuit more resilient to external influences knowing its logic? Your task is to develop an algorithm for creating such a reliable circuit.

Let a logic circuit without feedback or memory elements is given, consisting of the following 6 elements:

The circuit is affected by environmental noise changing gate logical value to the opposite with a certain probability. Your task is to construct a circuit which has the same logic function as the original one, but is less prone to failures. Under the terms of the problem the circuit that you construct should exceed the initial area no more than "K" times .

One of the parameters which characterize failure tolerance of logic circuits is COF – “Total circuit failure resistance factor”. COF is calculated as the ratio of the number of correct results of circuit performance (all circuit outputs must have correct value) to the total number of the performed tests. Accordingly, for the most reliable circuits COF tends to 1.

Every logic gate of the circuit is characterized by the following parameters: S – gate area, p – failure probability (in percent) under current external conditions.

The next line shows the number “I” (0 < I < 250) – the number of circuit inputs, followed by I lines, no more than 20 characters each, separated by spaces – the names of the input nodes of the circuit.

The next line shows the number “O” (0 < O < 150) – the number of circuit outputs, followed by O lines, no more than 20 characters each, separated by spaces – the names of the output nodes of the circuit.

Then the number of logic gates in the circuit N (1 < N < 5000) is stated, followed by N lines with the description of each gate.

Description of each gate begins with its type, next come the names of the input nodes, then the name of the output node

For each test you should present the circuit description of in the following format. In the first line number N (1 < N < 100000) – the number of gates in the resulting circuit. This is followed by N – lines with the gates description. Each gate description begins with its type, next come the names of the input nodes, followed by the name of the output node.

The number of scored points Score is summed over all tests. The number of points received for a test is equal to COF value calculated for your circuit. COF is calculated by Monte Carlo method? in two steps:

1) in the first step, the judge determines that your circuit works identically to the original one. The same test sequences (several thousand) are fed to the inputs of both circuits and Boolean values at the outputs of the circuits are compared. If the logical values differ, you get the status of Wrong Answer. Also, the judge checks that the given circuit redundancy was not exceeded.

2) in the second step, the judge will invert the values on your circuit gates randomly with the given probability and compare the output values for your circuit and the benchmark circuit. If at least one of the outputs will be different, «wrong answers» counter will be increased. Formula used for calculation: COF = (TT - INC)/TT, where:
TT - total number of tests
INC - number of tests, where at least one output of the circuit manifested error

Let logic circuit is given (see the figure). Required redundancy should not be more than 4.1 times. The circuit is based on the library, for which:

INV has area 50 and failure probability 3%

AND has area 60 and failure probability 3.1%

NAND has area 70 and failure probability 3.3%

NOR has area 70 and failure probability 3.4%

XOR has area 70 and failure probability 3.5%

Input file for this task looks as follows:

Let our algorithm uses standard triplication technique and selection of a Boolean value which is used on the majority of outputs (Triple Modular Redundancy (TMR)?). In this case, the output file can be written as follows:

Figure for the resulting file 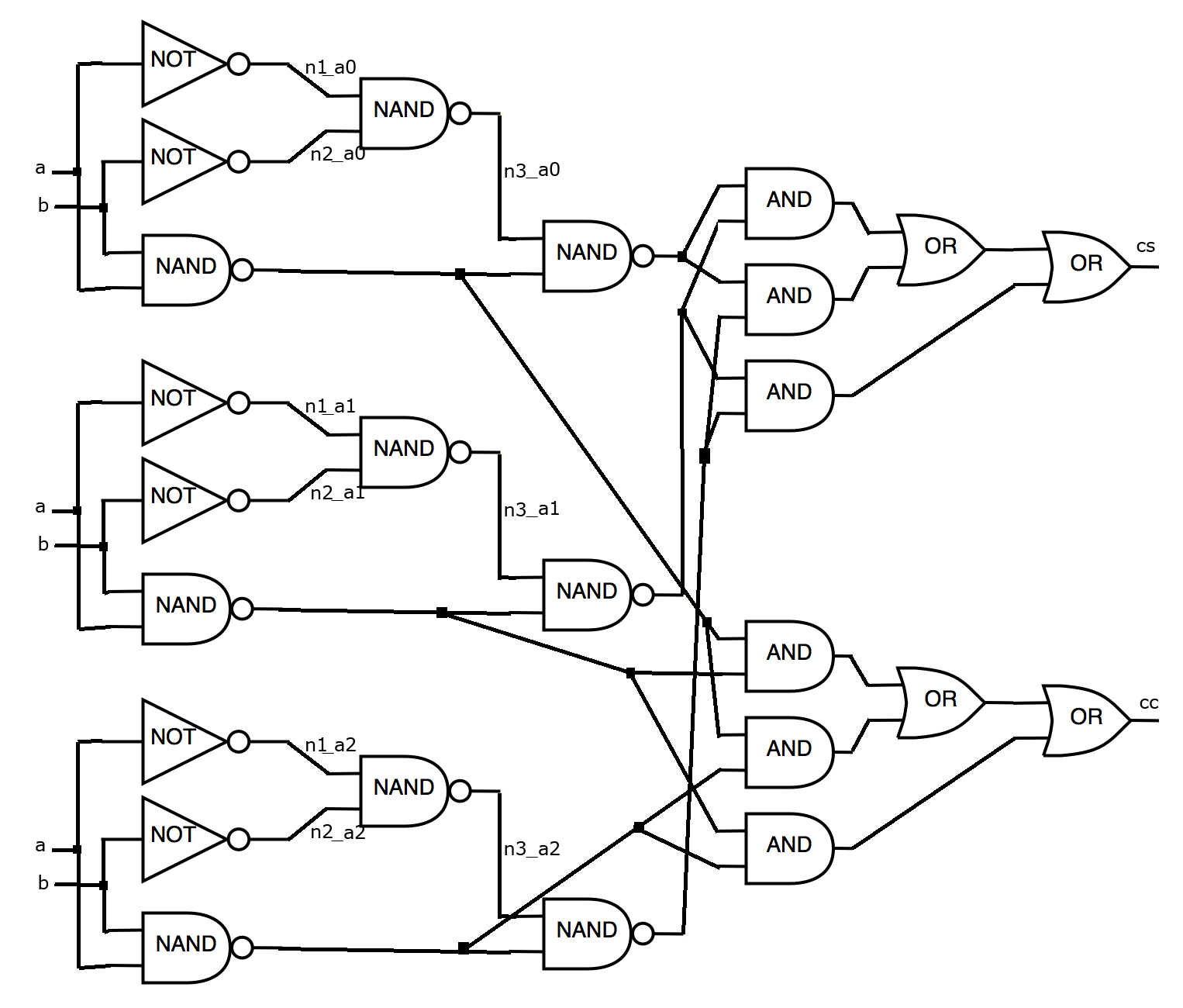 After simulation this solution will score 0.682661 points.

1) Simple solution C/C++ - program reads the data and prints the circuit as it is, without changes.
2) Judge at C/C++ - program, which is used on the server for evaluation of the solution. Can be used locally to test the effectiveness of your solution.
3) Test data set - a set of 102 test circuits, similar to a set on the server.